The most often overlooked aspect of room design is the stuff you put in your room. You'll be shocked and dismayed at how much trouble you can cause yourself.

In the middle of the 1970s, particularly on the West Coast, dead was in, especially when it came to recording drums. The mindset at the time was to throw as many blankets and carpets as possible in the tracking room to absorb as much of the reverberant energy as possible. This was done in an attempt to make the recording sound more articulate (meaning each instrument was clearly audible in the recording), but the result was some incredibly dry and dead sounding records. Producers and engineers were experimenting, and well, sometimes experiments don’t turn out too well.

Unfortunately, a lot of that mindset has survived, causing confusion for the AV enthusiast who is putting together a dedicated home theater or listening room in their home.

With that in mind, it stands to reason that you should design your room to be as sonically dead as possible, right?

It’s all about early reflections.

Sit in your chair in your prime listening position and look at your speakers (L-C-R), then look at the walls to your left and right. Somewhere along that wall the direct sound from the speaker bounces off the wall and then heads for your ears. This is called the first reflection. 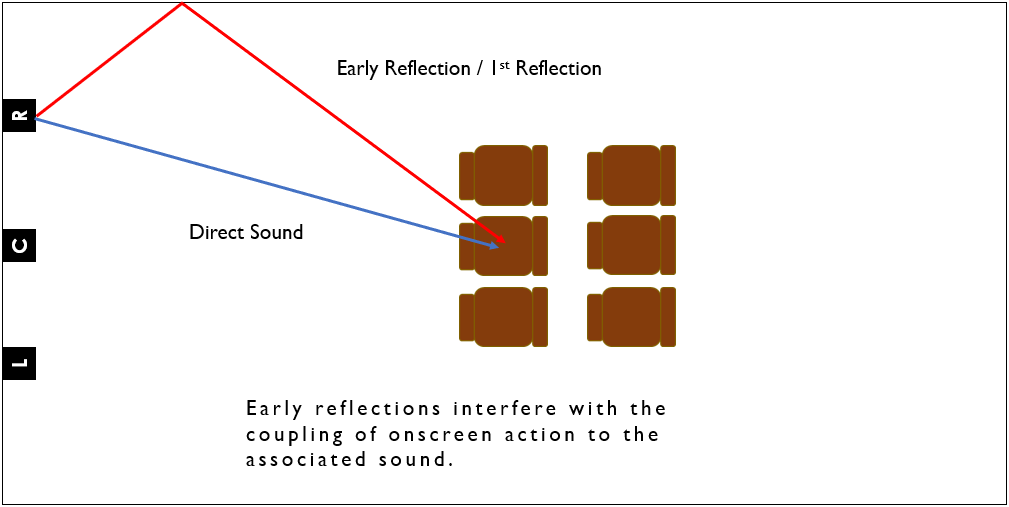 If you can’t simply treat the entire first third of the room, use the mirror method to find the first reflection for your listening position and treat that specific area. Sit in your listening position and have a friend move a mirror along the lateral walls (and the ceiling too!). When you see the speaker in the mirror you have found the first reflection point.

Because you will more than likely need a place to sit, some curtains on the windows, a painting or picture or two, a carpet, some lights, tables and other assorted bric-a-brac, you also treat your room with absorptive (or diffusive) material by default. The things you put in a room play a big role in how a room sounds, so try to keep the reflective decorations to a minimum in that all-important first third of the room. In a home theater and to a lesser extent a dedicated music room, you can’t really over absorb in the first third of the room, including the area behind the screen or television (the front of the room), but one unfortunately placed mirror can wreak havoc on how your system sounds!

The second third of the room benefits from reflective surfaces which will make the surround effects more life-like.