I May Be Old, But I Got To See All the Cool Bands

For my birthday several years ago, the youngest offspring came home from college and gave me a bumper sticker (along with some show tickets) that read “I May Be Old But I Got To See All The Cool Bands.” Gentle ribbing at my advanced pre-geriatric state aside, the bumper sticker spoke the truth. And for the record I really wasn’t all that old when she gifted me those wise words. Getting older is the one thing we all have in common and I got to see some shows that will never be matched, so make fun all you want.

It all started when I was fourteen and my oldest brother took me to my first concert. We were ten years different in age and I’m pretty sure my mother made him take me. For $5.50 we saw Black Oak Arkansas and Foghat at Asbury Park Convention Hall. I waited two weeks for the pictures I took to come back from the developer, and when they finally arrived, I couldn’t see a thing, but the memories are burned in my mind. Rock and roll was cool. I was hooked. My next show was ZZ Top and Slade in Paterson, NJ with a church youth group (I didn’t even go to church but there was this girl…). 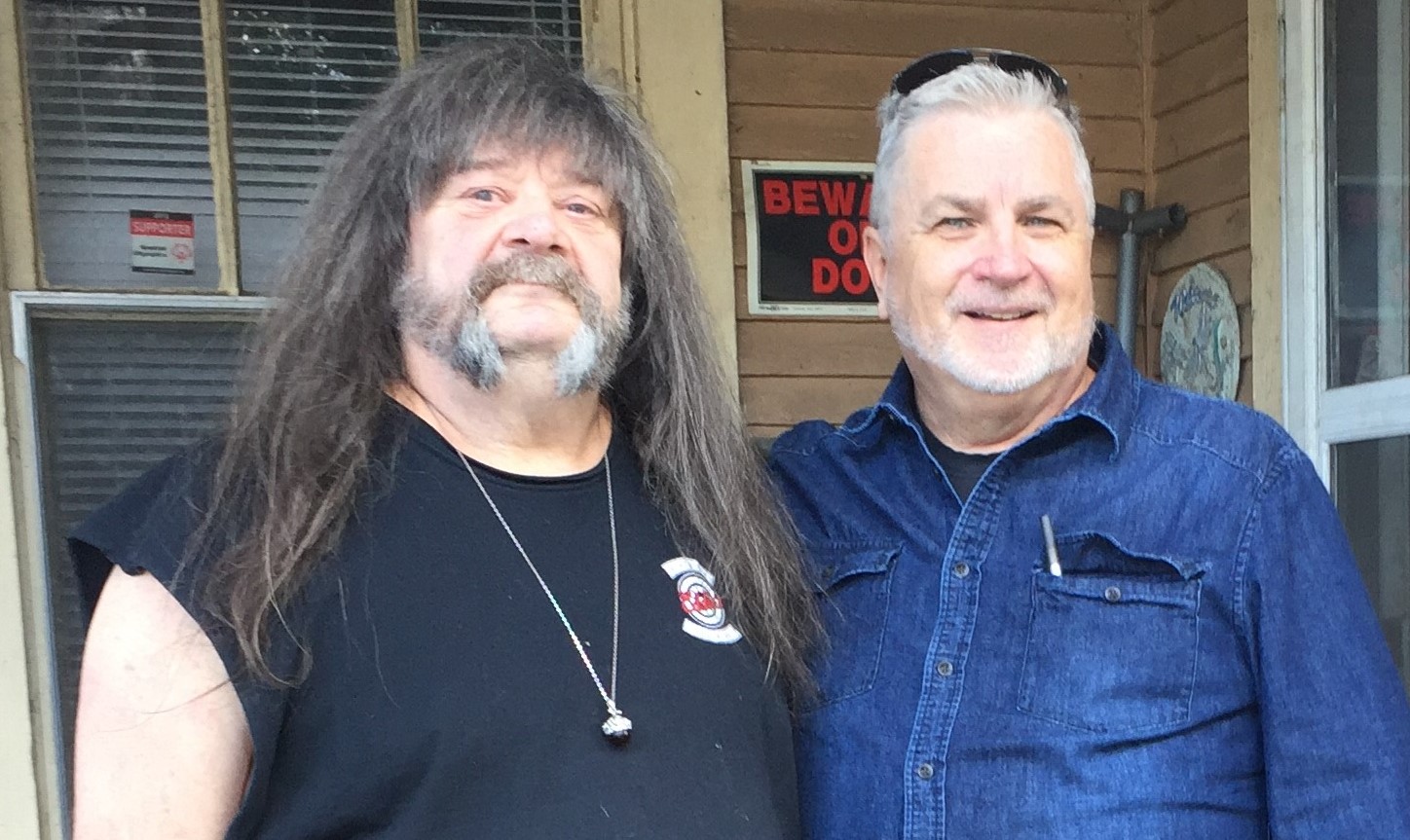 (Above) Forty years after seeing him play at the first concert I ever went to, Rickie Lee Reynolds from Black Oak Arkansas and I after a day of hanging out in Memphis. A strange, small world indeed.

The following winter, my middle brother took me to see Deep Purple at Nassau Coliseum on Long Island where we had front row seats (he knew a guy who knew a guy). My mother would have pitched a fit if she knew the details of that night. Ahhh, glorious rock and roll.

In short order I saw The Allman Brothers Band (first of fourteen shows), Grateful Dead (at Raceway Park in Englishtown NJ with a full bill and 100,000 drunk people), Aerosmith (someone threw a cherry bomb on stage and it went off right at Steven Tyler’s head. The show ended after two songs and Joe Perry came back out and flipped off the booing Philadelphia Spectrum crowd), Black Sabbath, ZZ Top (again), Slade (again), Marshall Tucker Band (front row seats purchased for $7.50 from the head shop down the street), Parliament Funkadelic, Uriah Heep, Chaka Khan and Rufus, and Lou Rawls (I went with my dad and damn if that was not a great show).

Then I got my driver’s license and I let my friends talk me into sneaking that very same dad’s Dadmobile to Hoboken so we could take the subway into Manhattan to see Led Zeppelin. Four clueless suburban kids in New York City on a humid June night trying to find our way to Madison Square Garden (directly across 7th Ave from the train station) is probably illegal now or something, but what a night. Did you know that in Manhattan people come up to you and sell you stuff? Back then I didn’t. Ten years later I spent Thanksgiving night with the girl who would remain the love of my life watching John Mellencamp from the fourth row at Madison Square Garden. I mean, people come right up to you and sell you outrageously good seats just an hour before show time. The variety of things you can buy on the street in NYC never ceases to amaze me – all you have to do is just stand there!

Once I had my own car and my own money, it was game on. In the next three or four years it was Emerson, Lake and Palmer, Pink Floyd (Animals and the Wall), Elton John, Heart (almost the worst show I ever saw, sorry but the truth needs to be told), Van Halen (twice), Kansas (from terrible behind-the-stage seats in Philly but Kerry Livgren stopped and chatted with us after the show), KC & the Sunshine Band (there was this girl…), Eagles, Joe Jackson, The Clash, Rush, UFO, Hall & Oates, David Bowie. Peter Frampton, Lynyrd Skynyrd, Styx, AC/DC, The Captain and Tenielle (different girl…), Twisted Sister in a Jersey Shore dive bar, The Police in a Lower Manhattan dive club, Pretenders, The Cars, The Who (Daltry hit Townshend in the head with his microphone and Townshend punched Daltry in the face) and dozens of others that have slipped away with the passage of time.

The Allman Brothers run of shows at the Beacon Theater in NYC (March 2001, above) were legendary.

In the years since I have continued to take in live music as much as possible, but nothing will ever match that period of time. Tickets were generally less than $20, bands toured all the time, and I lived on the Jersey Shore, an hour from New York City and an hour from Philadelphia. I’m writing this not to brag (okay I’m bragging a little), but to share what an amazing time it was and how lucky I was to be around for it. To this day I see shows whenever possible (come on COVID-19, it’s time to take a hike now!), and living in Nashville the opportunities are boundless. J. Roddy Walston and the Business, Stephen Kellogg, Lake Street Dive, St. Paul & the Broken Bones, Father John Misty, Dawes, Tedeschi-Trucks, Vince Gill, Suzanne Vega and John Prine, are some of the shows I was lucky enough to see in just the last 18 months. Even though the new bands on that list are great, and some of them may become timeless, my prime concert-going years were like a window onto a second wave of Classical Music – not Classic Rock, but classic music that will last for hundreds of years in one form or another. I’m sure back in the old country there was some bourgeois country-gentleman who saw Mozart and Beethoven who felt the same way.

Music wasn’t better ‘back in the day,’ it was just pretty much the only thing there was to do. Having said that, there really isn’t any debate a great deal of music was created in those years that people will still be listening to 200 years from now. Of all the years in the history of music to be a semi-rogue teenager and college student, I can’t think of a better time. Once we get back to life as we want it to be – and make no mistake that day is coming – let’s make live music a thing we’ll be happy to tell our grandkids about someday!

The music is out there, we just need to be a part of it.