The Ghost of Audio Past - A Holiday Season Parable

In a mad rush to get to the airport last Tuesday morning, I forgot my in-ear headphones. I chalked it up to being out of travel practice and hit the first snack/book/candy/headphone kiosk past security. I swiped my debit card and agreed to pay the forty-one dollars (with tax) my new in-ear traveling companions were going to cost me. I didn’t pay attention to brand name or reputation – it was a cheap pair of Bluetooth earbuds, and I really didn’t expect much. The main goal was lowering cabin noise and catching some tunes or a few podcasts during the flight. And after all, we’re in the post-modern age, how bad could a pair of Bluetooth in-ears possibly be?

I charged and paired them then stuck them in my ears. I boarded the plane and sat back to listen to a podcast while chomping on some overly dry pretzels washed down with a Coke. All was good, and even though I’m a high-fidelity kind of guy, my forty-one dollar in-ears were getting the job done.

Later that evening I settled in for another terrible night’s sleep in another cookie-cutter hotel with paper-thin walls. I called up my Spanish guitar Spotify playlist and listened while I scrolled through some news and social media. I’m not going to say the in-ears sounded bad, but I actually would have preferred to hear the slamming of doors and muffled conversations peppered with the occasional embarrassingly loud laugh that act as background noise whilst on the road. These things were atrocious.

They were all mid-range, with no sizzle and no bass, but that was made all the worse by the terrible gauzy voicing that covered the frequencies I could hear. FIFTEEN HUNDRED HERTZ WAS RIGHT UP FRONT while everything else muddled along in the background. I tried to listen but couldn’t. My ears would have none of it. These in-ears were an insult to music. Even garage rock and lo-fi-on-purpose would be insulted to be forced through these things. I truly got what I paid for I lamented as I thought of my Mu3’s sitting wistfully silent on my armoire back home. I’m old enough to remember the Discman (and truth be told, the Walkman), and although they were certainly not “hi-fi” they crushed what I was listening to at that very moment. Suddenly the 1990s didn’t sound so bad. Or the Eighties. I would have added the Aughts in this rant as well, but seriously, the mp3 basically lowered the quality bar so low the industy is still trying to convince people that decent sounding music is a basic life comfort. The thought occurred to me that in the name of convenience these in-ears were probably the best music experience far too many people settle for.

Truly, my temporary Audio Present was falling short of expectations. Thankfully, I would soon be home in the comfort of things that sound good, but on this night my rest was fitful. In a world full of serious issues, it might seem a trivial concern, but an unfortunate amount of people have been tricked into believing lamentable forty-one dollar in-ears are sufficient for a happy life. They are not. And I was concerned for all of them as I longed for something decent to listen to. It was not an undigested bad bit of beef, it was a regrettable pair of earbuds causing me these overly dramatic thoughts.

In a lot of ways, technology has forced us to devolve. When it comes to our music, (barely) “good enough” has become acceptable, and devices with no discernably redeeming qualities have become the norm. We live in a world that boasts the ability to listen to any song, any time, from any place in a fidelity even audiophiles would have been happy with just a few short years ago but cheap convenience has won the day.

Music uses more of our brain’s processing power than any of our other senses (and most other activities for that matter), it is the key to our emotions, memories and connection to each other and our world, and yet, in the name of convenience we suffer bad format after bad format after bad format. We live on a street of Michelin Star restaurants, but we’re compelled to eat cold wrinkly hot dogs in soggy buns from the cart at the end of the street. 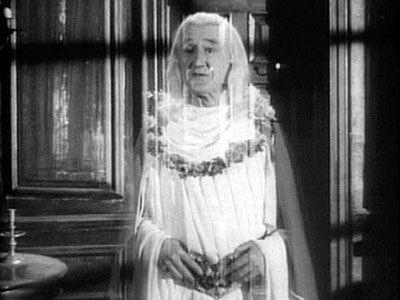 When we think of the Ghost of Audio Past, we see a pile of bad formats and gimmicks. The 8-track, the cassette, the 45 rpm single, the factory installed car stereo, Napster, the mp3, low bit-rate streaming, the list goes on and on. In spite of all the bad formats we’ve been subjected to, the Ghost of Audio Past is full of happy nostalgia too. The first time a stereo knocked you over with its power and finesse. That song that could only have been written for the way you feel right now. I’m still chasing the feeling of my first decent headphone experience thanks to a pair of Koss headphones borrowed from a friend when I was fourteen. Hearing something for the first time – in a song you’ve heard a hundred times before – is as much as thrill as hearing the song for the first time. Convenience is a wonderful (and necessary) thing but so is focused listening to a song played back the way the artist hoped you would hear it. Forty-one-dollar earbuds are good to suppress cabin noise, but if that’s all you subject your ears to, you’re suppressing the very joy music was intended to give you as well.

The Ghost of Audio Present is a little more complicated. I think of Carol Kane in Scrooged. We have access to all the music, wherever and whenever, but at the same time the pure human power of music gets lost in the convenience. Sure, I could drown out the airplane’s cabin noise with a cheap pair of earbuds, but my ears are still angry at me for trying to trick them into listening to those same earbuds with focus. The Audio Present is filled with millions of people who have yet to experience the pure bliss of a favorite song that sounds the way its supposed to sound. The great audio unwashed have a veil over their ears that can only be lifted by rejecting (barely) good enough for I deserve the best. With a steady diet of great audio even Ebenezer Scrooge himself would be less of a drag to hang with.

There is truly not a better time to be a music fan: Think of all the time in history when what we have out our fingertips today didn’t exist. However obscure or mainstream, it’s available to you immediately and in a fidelity only the super-rich snobs of yesteryear could enjoy. “World Music” is no longer a catch-all bin at the back of your local record store, because now it’s all world music. What if you could hear all the music and each time you listened it was a magical experience? That’s the Ghost of Audio Present. 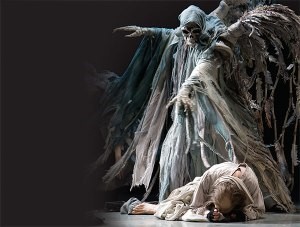 The Ghost of Christmas Yet to Come always made me shudder – a sad, dystopian future Christmas is kind of a serious bummer, even if you change your ways and yell out your window to the local street urchin to buy you the best goose the butcher has to offer. Even though the Ghost of Christmas Yet to Come is usually portrayed in a terrifying manner, the Ghost of Audio Future isn’t very scary at all. No, I think the Ghost of Audio Future holds a brighter experience for us all (not to mention crisper mids and tighter bass). There is a fabulous world of experience at our fingertips that doesn’t have to sound like garbage – it can sound wonderful, once we convince ourselves we are worth it.

Where are we going to be in ten years’ time? The beautiful thing about the audio industry is that no matter how good we get, there’s always another goal to master. It would be natural to think any further changes are only going to be subtle and so nuanced only a trained ear can hear them but that couldn’t be further from the truth. Of course, there are a lot of technological advances that are subtle, but a subwoofer the size of a football that competes with units three times as big? I’d say technology is a very, very good thing. The first time I heard LS50 Meta I played a track I have been listening to since I started in the industry back when I used a dinosaur generator to power my 8-track, and I heard space and nuance and dimension I had never heard before outside of a really top-notch recording studio. My brain knew it was there and filled in the gaps for me, but now my ears were delivering the full message brought on by the speakers which allowed my brain to put more emphasis on the magic of what I was hearing. That is a very, very good thing and everyone deserves to experience that as often as possible.

Of course, next time, rather than preoccupying myself with all of these profound thoughts, I’ll just remember my Mu3’s and skip the bad sound altogether.

I speak for all of us at KEF when I offer our seasonal best wishes and our wish for you all to experience the magic and finesse of a great sounding song. What a wonderful sounding world we will all live in and we’re all worth the very best the magic of music has to offer.