We started working on and perfecting the Uni-Q in 1988 and with every passing year our engineers learn something new that brings us ever closer to absolutely perfect audio performance. People often lump the Uni-Q in with standard, everyday co-axial speakers, but that comparison couldn't be farther from reality. If you like detail and honesty in your music and movie soundtracks, we've designed the Uni-Q for you.

"From a listener's perspective, the combination of the matched directivity and precise time alignment in all directions gives significantly improved stereo imaging over a wide listening area, the realism of which is enhanced by the even balance of the reverberant energy within the listening room."

Coaxial: Geometrically speaking, two (or more) three-dimensional forms that share a common axis. Triaxial would specifically refer to three three-dimensional shapes sharing the same axis
Paraxial: Refers to two (or more) three-dimensional forms that lie in close approximation to each other and that form a small angle between each other
Point Source: A single localized source not perceptibly distinguishable from other sources
Directivity: Referred to as 'Q,' the measure of the radiation pattern from a speaker. A loudspeaker with a high degree of directivity (narrow dispersion pattern) is said to have a high Q.

Back in the day, the audio enthusiasts' Holy Grail was the coaxial speaker, and if you were really advanced, the triaxial speaker. 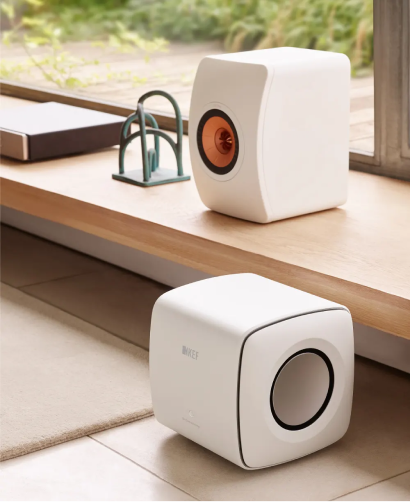 The photograph at left shows a very cool "triaxial" speaker from a 1955 Pilot Console Hi-Fi Set. The speaker is from University Sound (an early division of the Altec Company). The advertising copy listed the speaker as "diffaxial" with three drivers mounted concentrically to each other. The size of the HF driver (folded horn in the picture) is pretty substantial, as the LF driver looks to be about 12" in diameter.
As coaxial speakers evolved in the years since this behemoth was first introduced, one of the main problems to developing a truly coaxial speaker was the sheer size required to make a decent HF unit (tweeter). One look at the magnet in the Pilot/University Sound speaker (right) and we can see that even with all of that space, the speaker was still not truly coaxial. Just sticking an HF unit in the center of an MF unit doesn't solve the problem of point sourcing and phase coherency.

But if you truly love detail in your music and movies, there's a reason why all of this matters.

To replicate a musical performance, the concept of acoustical point source needs to be taken into account. When you speak, regardless of whether you use your lowest tone or your highest tone, all of the sound comes from one point: your mouth. To take this one step further, a recording engineer will generally use only one microphone to record your voice; a sound generated from a single source point is recorded by the microphone (which is a single point receiver). All of the frequency components of the sound (in this case your voice) come from one source and are then captured by one receiver.

Even a source as seemingly simple as the human voice can be quite a challenge for most speakers. The problem is, the frequencies of the human voice cross the boundaries between what a woofer, mid-range and tweeter are responsible for recreating.

Now, add in all of the instruments that make music and you can see the difficulty a loudspeaker has when trying to replicate an audio recording. To reproduce those sounds as faithfully as possible two (or more) drive units are required. Large, heavy speakers do a great job reproducing deep bass but respond too slowly for higher range instruments (like flutes and cymbals). Conversely, drivers that are quick and light enough to reproduce high frequencies generally begin to distort as soon as they are asked to reproduce bass sounds.

Let's take a listen to Yo-Yo Ma and Bobby McFerrin (along with guests Marc O'Connor on violin and Edgar Meyer on bass) performing Hush Little Baby. Not only is this a fabulous performance of a simple song, it also helps illustrate the concept of single point sourcing.

There are several ways to look at single point sourcing:

From the audience's perspective, the stage is an array of single point sources (the cello, McFerrin's voice, the bass and the violin) that all work together to produce a single, cohesive musical performance. Add the reverberation of the room and the ambiance of the audience and you get the full experience of a live performance.

During mixing, the recordings are placed in the soundstage to replicate the original positions of the instruments so that during playback the listener can get an experience as near to the original performance as possible. We should note that bass frequencies are not very directional so they are typically not panned (or placed in the soundstage) and they do not generally get affected by the problems associated with the placement of the drivers in a loudspeaker cabinet.This recording was done with three stage mics on boom stands and one handheld microphone with other mics placed in strategic spots on the stage and around the theater to capture the ambience of the space. These sounds are then mixed together and placed in the soundstage resulting in a recording that replicates what the audience heard.

Now let's look at the individual components for a moment to illustrate just how hard it is for a speaker system to replicate this performance:

• The double bass is producing frequencies from around 60Hz to around 130Hz while at the same time McFerrin's whistle is producing frequencies around 2kHz
• When McFerrin scats (vamps), his voice is around 600Hz and when he sings he's between 300 and 500Hz
• The cello is around 500Hz and the violin is up to and over 2kHz in some spots
• Add harmonics and the ambiance that makes a performance "real" and you've got frequencies around 3.8kHZ (voice harmonics), 5kHz (violin), and 7kHz and 9kHz (from McFerrin's whistling)
• But most importantly. listen to the phrase McFerrin sings from the 2:02 mark to the 2:27 mark. Not only is it a fabulous example of breath and voice control, it also illustrates the difficultly in reproducing music naturally with good dispersion. McFerrin's voice transitions the crossover points of a 3-way speaker twice during this phrase alone. How much better would we be able to enjoy his immense talent if we could hear him coming from one single point in space as opposed to three?

Even in a very simply orchestrated piece, that's a lot of work for a loudspeaker, let alone the work a loudspeaker does for more sophisticated musical recordings. And all of that pales in comparison with the complexity and detail of a movie soundtrack.

To get around this, typical loudspeakers are designed with the HF mounted above the MF, or with both drive units mounted side-by-side (paraxial). The problem with this is that the sounds come from two distinct locations. Even though McFerrin's whistle, scat singing and regular singing all originally came from the same place, they would be handled by different drive units in a loudspeaker. It's easy to see that if one drive unit is mounted to the left or right or above or below, another drive unit trying to replicate the same performance, the sound will not arrive at the same time at the listener's ear simply because they originated in two different places.

With one drive mounted slightly ahead of the other (as seen in the picture of a conventional coaxial speaker to the left) the sound may come from almost the same physical location on one axis, but it will not come from the same time alignment in space resulting in phase incoherency that gets processed by our brains unnaturally. This mis-alignment, known as the vertical interference pattern, can result in a very tight 'sweet-spot' (high Q) or area of high-quality sound reproduction that is often less than 10 degrees wide or less.

The answer to this problem was found in a magnet made from a combination of neodymium, iron and boron that is ten times stronger than a standard ferrite magnet. The strength of this new magnet allowed us to build a HF unit that was small enough to fit in the center of a standard-sized MF drive unit, thus allowing our engineers to find the precise placement point of the two drivers so that they were completely coincident with each other. This 'coincidence' allows all of the upper and lower frequencies of a single performance to actually emanate from the same place in space.

Simply put, the midrange and treble units are time-aligned in all directions in the three-dimensional plane, not just on one  axis as with vertically separated units like the speaker shown above.

Also, in a conventional design, in addition to the unwanted distortion and audio confusion, there is an energy dip at the HF/MF crossover point which results in further distortion in the listening area.

By being able to precisely time-align our drivers in all directions from the axis, Uni-Q technology completely eliminates both of those problems. Because it is mounted at the center of the MF unit, the HF unit's directivity is also governed by the angle of the MF unit's cone the HF directivity is the same as the MF directivity. This means that as the listener moves away from the main axis, the output of both the HF and the MF reduce at about the same rate, increasing the tonal balance and the stereo imaging throughout the listening area.

Translation: Only one person, sitting in the perfect intersection ("sweet spot") of all of these frequencies gets to hear high-quality, detailed sound and everybody else gets to hear a mish-mosh of phase incoherency. Uni-Q eliminates that problem.

To quote the engineers who figured this all out: "From a listener's perspective, the combination of the matched directivity and precise time alignment in all directions gives significantly improved stereo imaging over a wide listening area, the realism of which is enhanced by the even balance of the reverberant energy within the listening room."