How Loud Is Too Loud?

Back in the day, there was a certain amount of bravado in admitting your ears were ringing the next morning. Now of course, my ears (mostly my right one) ring every morning, and every minute afterward – from the tinnitus I gave myself over years and years of aural over-use and occasional abuse. I don’t have a bad case because I started to get serious about protecting my ears fairly early on in my career. The buzz in my ear sits at about 40dB 24 hours a day, seven days a week. I’m lucky though, because all I have to do is find a fan that runs slightly louder than 40dB and I can drown out the tinnitus and get some sleep.

That’s kind of the same thing a lot of you do with your earbuds and headphones. Subway noise, traffic noise, airport noise, whatever noise you are trying to drown out, can easily be overcome simply by turning up the volume on your Smartphone and letting your earbuds cover all that nasty noise up for you, or so you think.

Let’s say you’re on a subway platform in Manhattan – the ambient noise around you will be anywhere from 80 to 114 dB. If your earbuds or headphones don’t block noise out sufficiently that means you are fighting a 100 dB subway platform with 80 to 100 dB of music from earbuds that may not fit exactly right to do the job. If your earbuds or headphones fit properly and filter out noise you can get away with significantly less.

Generally, hearing loss begins at 85dB after 6 to 8 hours exposure. A lightning strike (125dB) or firearm (140db +) will cause instantaneous hearing loss. 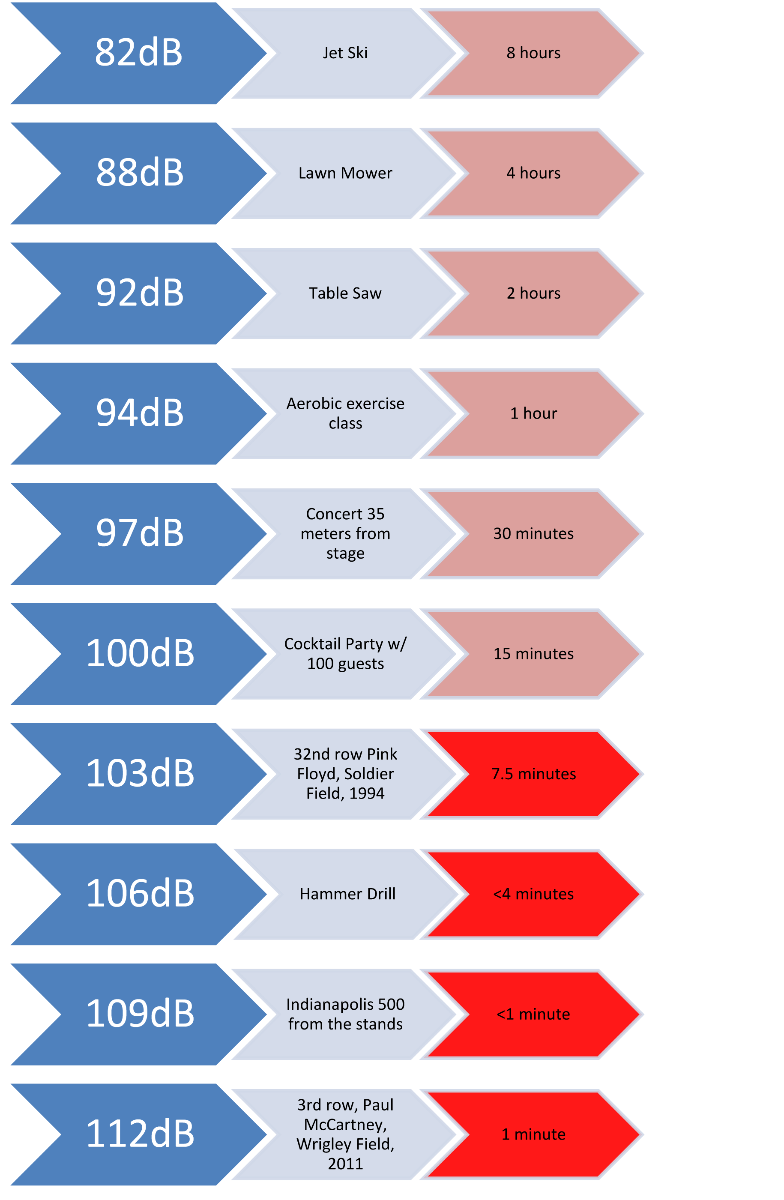 In 1972, three audience members passed out at a Deep Purple concert in London where the sound pressure level (SPL) was measured at 117dB.

Electronica act Leftfield played a show in Brixton in 1996 where SPL was measured at 137dB.

In 1998, Hanson mmmm’bopped their way to 140dB that even drowned out the sound of all those screaming teenaged girls.

In Ottawa, KISS was asked by neighbors (literally, they called the police) to turn that damn music down after reaching 136dB at a show in 2009.

We should note here that the Guiness Book of World Records stopped accepting “loudest band” or concert records out of fear of encouraging people to make themselves deaf.

A standard personal music system with stock earbuds can cause 100dB of SPL at your eardrum, which is enough to cause hearing damage after 15 minutes.

Here’s the rub folks, there is no such thing as temporary hearing damage – you damage your hearing permanently when you damage your hearing, and the affects over time are cumulative. That means if you started with hearing that was a 10 on a scale of one to 10 when you were a teenybopper, you’ll never have that level of hearing again. Your baseline will be at the level left after exposing your ears to damaging SPL.

Even with a home system you have to be aware of the dangers that may lurk – especially if your system is noisy or creates a lot of distortion (which will generally make you play your music louder as you search more detail).

We’re fans of great sounding music and movies, but mostly we’re fans of all of you music and movie lovers out there, so protect your ability to enjoy the things you love by protecting your ears. Keep noise levels to a minimum by using only quality gear, and keep volume levels safe.