The Best Bands You Never Heard Of

There has really never been a better time to be a music fan. From every bit of pop music made in the past half century to any artist from anywhere in the world, it’s all available, literally at your fingertips. There is plenty of great new music out there, but of course, just like any other time in history, finding it isn’t always easy.

Radio was – and still is – an important way to find new music, but the modern problem with radio is formula. If it fits a station’s format, you’ll hear it, if it doesn’t, you won’t. Spotify and TIDAL algorithms help a lot, but they don’t dig in as deep as they could. Another great way to hip yourself to new music is the water cooler conversation, but in these times of COVID-19 even that ain’t what it used to be.

During a few 2020-version water cooler conversations we gathered some tips on some great artists no one has really heard of yet.

Tayvein Roberson, our Marketing and Events Coordinator, offered up Virginia’s Brik.Liam who takes his soulful voice – think Marvin  Gaye – and attaches it to contemporary R&B for a laid back style that is at once brand fresh new and totally recognizable. Roberson also suggested Amaal, a Somalian refugee currently living in Toronto, and although her million-plus Spotify streams almost disqualify her as someone we never heard of, her talent and style totally deserve 100 times more streams, so, yeah, give her a listen.

Jack Sharkey, Senior Technical Engineer (and KEF USA blog author) offered two obscure artists the world should be more aware of. Gandalf Murphy and the Slambovian Circus of Dreams are as odd as their name implies but when it comes to hooks and craftsmanship, this Woodstock, NY, based quintet is a must-listen. Farah Elle (left) is a Libyan singer by way of County Meath, Ireland who is reminiscent of Amaal. Elle will also remind you of Bjork except without all the hard to understand stuff. Her recent single Sunblock is a fabulous piece of modern R&B.

Parker Greenlund (KEF Northern Regional Sales Manager) brought up Chicago’s Ben Miller Band.  “I’ve seen these guys live at small bar stages here in the Chicago suburbs. They play unique instruments like the washboard, and a synthesized rotary phone, a tub bucket [and it] looks like their new album has songs with instruments constructed of broken axes. It’s fun music that is inspiring and goes well with an ice-cold hipster brew while you escape the woes of the world for a little while.” Get Right Church and Hurry Up and Wait are absolutely worth the listen. 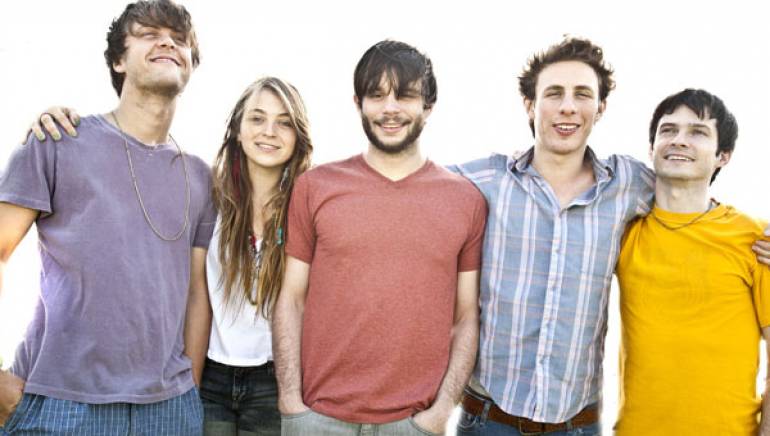 Mike Vale, our e-Commerce Web Coordinator offered up Givers (left) from Lafayette, Louisiana. The excellent tune Up Up Up has nearly 15 million streams, but if you’re not one of those 15 million and you’re in the mood for some bouncy pop, give them a shot.

“They have enough of a dedicated following but never really made it mainstream. Maybe because they are too pop shiny for hipsters, and too unclassifiable for mainstream pop listeners. I saw them open for The Dirty Projectors at the Ottobar in Baltimore once and it was a crowd of ‘thinking man’ music aficionados who all stand motionless while watching a band with a hand up to their chins to show how much they are considering the notes they aren’t playing. And here come Givers rolling through a handful of songs that got everyone’s knees and necks freed up so that the room was actually moving! By the end of the set there was an audience filled with smiles and a chorus of disbelieving wows. They can turn one of their sugary studio songs into noodling explorations, or stretch and twist one with West African polyrhythm, and then bash out the ending like the E Street Band might.”

Technical Service Rep Troy Burke said “Lupus Nocte, because there’s nothing wrong with Synthwave when you’re just trying to pass out. I’ll admit it, I’m an insomniac and current times don’t make it easy to find that much needed rest.  Lupus is wonderful and has found some minor success within the Minecraft community of all places! Give them a listen, especially if you need that Synthwave flute in your life (maybe a nap, too),” For a cool 80s vibe without the pretense, definitely give them a shot.

Honorable mention for Best Band No One Has Ever Heard Of goes to Chicago’s Corduroys for jangly guitar-pop. Squeezing Grapes will ear worm its way right into your head. Also, the Jamie McLean Band for roots music that’s crunchy without working very hard. Bring It On Home To Me and When the Levee Breaks are highly recommended.

So, there you go, nine artists you probably never heard of but who are all definitely worth a listen.