How the Soundtrack Guides Our Emotions Through a Film, Part 1

by Mike Vale, For KEF

Yes, movies have explosions, and car crashes, and jet fighters racing toward giant monsters, but for these colossal scenes and the moments in between, one of the most important parts of a movie is the way the film score guides and provides us with the emotional cues that add another level to our enjoyment of cinema.

Are KEF speakers great for music only, or for home theater too? — It is not only a frequent question I get asked, but also one I love to answer. Since film soundtracks are comprised of dialogue, sound design (effects and the ambient sounds of the scene), as well as music, your home theater loudspeakers should reproduce all sounds faithfully so they provide the full experience the director and composer intended; if you are surrounding yourself with KEF speakers you’re getting the best of all worlds.

So many soundtracks and film scores have captured the public’s attention to the point they have become a part of the cultural lexicon. Be honest, when’s the last time you were in an open body of water that you didn’t at least think of that eerie, persistent Jaws theme? With that in mind it’s a good time to do a little digging into a few examples of the most moving, innovative, and just plain interesting soundtracks waiting to be heard again--and maybe even for the first time.

On with the show!

It only took a two note lead in for composer Ennio Morricone to redefine our notions of both the Western as a genre and the full potential of a soundtrack with his score for The Good, The Bad and the Ugly. Maybe it’s supposed to sound like a coyote, maybe an owl, or the wind rushing through the badlands. Whatever the intent, the motif grabs you, and it is repeated with different instruments for each of the titular characters: A flute for the Good, ocarina for the Bad, and the human voice for the Ugly.

The instruments used throughout are plentiful, and a good part of the fun is in trying to pick out what’s being used. Morricone and the musicians he selected used anything and everything to heighten the tension of the scene, and portions of repeated themes are played on different instruments when they return later. There is a particularly striking gunfight scene, tracked by the passage “Two against Five,” where a higher-register woodblock rings out a note until it sounds like a sonar ping. It’s these little details throughout that set the pace of the images and give the viewer a grander sense of depth and drama.

It may seem campy in hindsight, but if you take some time with the film you may note that it can be deadly serious. Most of Morricone’s score enters at a point that marks a moment of violence, sometimes as it’s happening, but more often as an exclamation point just after. One of the highlights is the counterpoint of “The Story of a Soldier,” almost a lullaby in terms of melody and the only part of the score with lyrics – which is performed by an orchestra of prisoners to cover the sound of Tuco being roughed up for information. The comfort of the twinkling piano and lilting harmonica runs completely contrary to the discomfort of the scene. This is something Tarantino would run with decades later to excellent effect in a number of his films.

Our next legendary soundtrack is a bad mother — Shut your mouth! — come on, you know I had to talk about Shaft!  Riding in on a crisp hi hat, some of the funkiest wah-wah guitar ever lets it all hang out for about two and a half minutes before Isaac Hayes, and by extension the soundtrack and the movie itself, makes the revolutionary move of interacting with the audience directly. It’s an of the people call and response moment that lets the audience in on just who we’re dealing with as we watch private detective John Shaft go about his day in early 70s downtown New York — and it’s as lively as it is effortlessly cool. 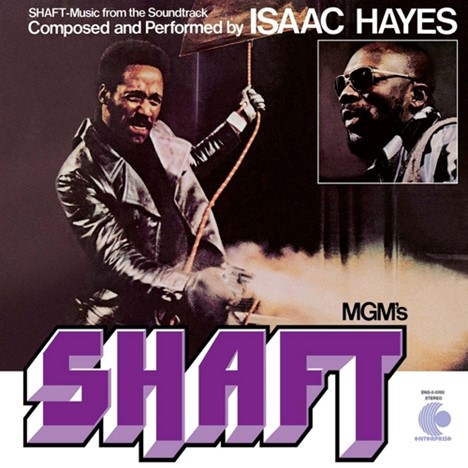 The soundtrack not only netted Hayes a Best Original Song Oscar™ for the theme and an armful of Grammys, but it topped the pop charts as well. It did so by making the groundbreaking move of bringing original popular music (and in particular the Stax Records sound) to the movie theater. Hayes glided comfortably between easy listening, soul, funk and jazz, and in doing so opened the floodgates for popular music in film scores — paving the way for other legendary soundtracks like Curtis Mayfield’s Super Fly and Marvin Gaye’s Trouble Man.

The score was recorded in a matter of days with the Bar-Kays and the Isaac Hayes Movement performing, and then recorded again with different sequencing for the double album to allow time for Hayes and company to stretch out and achieve a richer sound (best exemplified in the exquisite, extended nineteen-and-a-half-minute version of Do Your Thing). The album is immensely listenable, propelled by a groove-heavy rhythm section, and made organic and exciting with energetic conga work. Beastie Boys fans not already familiar with Hayes’ cannon might recognize the chirping guitar from Walk From Regio’s, which originally appeared in the film with organ—you can hear every movement of the pick on the strings stand out over flutes and horns as they buoy the song and eventually steal the show with the melody.

In Part Two we’ll continue looking at some soundtrack details from other blockbuster movies.