There is a very subtle – yet powerful – force that lurks (literally) behind even the best speakers.

“For every action there is an equal and opposite reaction.” Newton’s Third Law of Motion is wreaking havoc on your audio and you probably don’t even know it.

For every bit of sound energy a speaker produces from the front, it produces the same exact amount of energy from the rear. In some cases this rearward firing sound energy can be used for the listener’s benefit, such as with a rear-ported bass-reflex design, but for the most part this energy is a nuisance at best and a total destroyer of audio fidelity at worst, especially in the upper midrange and high frequencies. The problem is the rearward-firing sound energy bounces around inside the loudspeaker cabinet or enclosure inevitably making its way back to the driver where it interferes with the audio currently being produced. Basically, audio from a few milliseconds ago is now competing with the audio you want to hear NOW. Even though the current forward-firing audio energy ultimately wins out and is predominant, the unwanted rearward-firing energy still leaves a mark.

As far back as the early 1940s, companies held patents on reversed tapered horns that attached to the driver and were meant to keep this unwanted energy away from the driver itself. 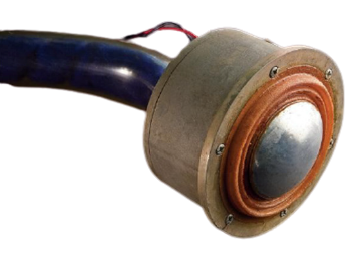 In 1967 (fifty-three years ago for those of you who are counting), KEF released the Carlton, our first loudspeaker designed to aggressively address the problem of rearward-firing audio energy. Basically, we took a 31 ½” long flexible plastic tube and attached it to the rear of the high-frequency driver. In this configuration, the rearward energy enters the tube and continues to travel inside of it until being fully dissipated keeping it from bouncing back and interfering with the current audio. A forward-thinking solution for sure, but alas, not a perfect one. Sound absorption was inconsistent and the tube itself created its own distortion-causing resonances.

Throughout the years, the best designs in the industry were able to effectively wipe out up to 60% of this energy, but the leftover 40% still bounced around and interfered with the speaker’s fidelity.

Fast forward to 2020. KEF and the preeminent company in the development of metamaterials, Acoustic Metamaterials Group, have joined together in a partnership to address this issue for once and for all. Using design concepts straight out of science fiction, KEF and AMG devised an incredible device that absorbs 99% of the unwanted energy the high-frequency driver produces. Literally, a problem that has confronted the audio world since its inception is solved.

And the result? Amazing. Seriously, you will hear things you never heard before. Detail and nuance in even your most familiar songs will pop out at you as if you are hearing the song for the very first time.

Metamaterial Absorption Technology is coming and its going to be spectacular.