Storyville, New Orleans and the Birth of Jazz

There really is no original music, it’s all a result of someone taking one from column A and adding it to column B to make it their own. Although, Jazz has been called “America’s only original form of music,” that’s not necessarily true.
Jazz is a mixture of military marching music, Eastern European klezmer music, Blues, folk, African, Caribbean, Latin and Spanish music to name just the main ingredients. What separates Jazz from all other music – and what makes it so uniquely American – is that nothing like it had ever been heard before. It was such a complete blend of other styles that the original components became all but unrecognizable. But there was also an attitude to Jazz that made it at once scary and intoxicating.
In the decades following the American Civil War, New Orleans was a major port and cultural center, not only for the United States but Central and South America as well. Trade from Europe and the Americas was centered in the Big Easy and the post-war boom brought with it the problems of rampant prostitution, gambling and generally untamed debauchery. Music and culture from around the world arrived in New Orleans on a daily basis, as did the seedier parts of life that come in stride with a boomtown. 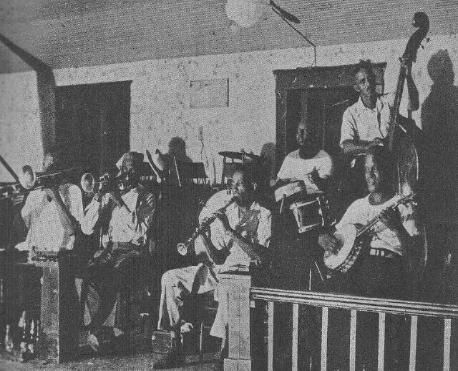 In 1895, City Alderman Sidney Story wrote the legislation that corralled the Red Light District into a 20-odd block area near the French Quarter. Jazz had been in its infancy in the years prior – especially Ragtime – but it was in the melting pot of Storyville that Jazz grew up. Storyville remained the center of the seedier side of life until World War One when Secretary of War Newton Baker had Storyville shut down and prostitution outlawed because of the problems of “distractions” among the Navy and Army personnel stationed in New Orleans. By 1940, what was left of Storyville had been completely torn down.

In the early 1900s, a tourist to New Orleans could purchase a Blue Book on the street that contained an alphabetical listing of all the brothels, “cribs,” prostitutes, restaurants, bars, drug stores and most importantly taxis and lawyers, available in Storyville. Music was an integral part of life in Storyville and this is where the story of Jazz gets rolling.

Cornetist Buddy Bolden is credited with creating the syncopated “Big Four” rhythm that became identified with Dixieland. At the time the beat was called the “Spanish tinge” and came directly from the habanero beat prevalent in Spanish music at the time. Bolden is the first in a long line of excellent cornetists/trumpeters that runs through Louis Armstrong to Wynton Marsalis, and he helped make the instrument synonymous with the city. Sadly, there are no recordings of his playing.

Meanwhile, in clubs around Storyville, an upper-class Creole piano player named Jelly Roll Morton was lying to his mother about where he spent his time as he perfected the syncopated left-handed rhythm known as tresillo, a rhythm that is probably the musical statement most identified with New Orleans to this day. Listen to Professor Longhair, Allan Toussiant and of course Dr. John and you will hear a piano style that has changed little since the 1890s.

Louis Armstrong was born near Storyville in 1901 and lived in poverty with his 16-year-old mother Mary. He spent his youth on the streets of Storyville and was sent to reform school at age six. At seven he was informally adopted by a Lithuanian Jewish family and it was this family who bought young Louis his first tin horn. Imagine a seven-year-old musical prodigy perched on top of a junk wagon, blowing his horn and alerting the neighborhood that the junk man was on his way. Armstrong wore the Star of David around his neck for the rest of his life as a remembrance of the help they gave him and how he saw the way the family was treated on their routes. When Armstrong was 12, he was arrested for firing a pistol and spent two more years in reform school, but those years were not wasted. The school was run like a military camp and Armstrong found himself playing cornet in the school marching band. The rest, as they say, is history, and by the 1920s Louis Armstrong was considered the most innovative, best (and loudest) trumpet player in the world. Listen to an Armstrong track and you will be amazed at the sheer volume of his playing; it was his volume that forced early recording engineers to come up with several innovations to get a decent balance between Armstrong and his backing players.

While Ragtime was being played in places as disparate as New York and Cleveland in the early 1900s, New Orleans was where the music found its grit and innovative tradition. The free and liberal attitudes of Storyville were a perfect pot in which the gumbo of Jazz was able to simmer for the twenty years prior to World War One. With elements from every bit of music and every type of player, Jazz became the essential American music, reflecting ourselves back to us.

Be sure to check out out Jazz Essential Playlists on TIDAL and Spotify..