Music is energy in the form of vibration. Capturing that energy and playing it back as faithfully as possible is what the home audio industry is all about (or should be). Our sole mission at KEF is to reproduce the energy sent to our speakers from whatever source, as faithfully and honestly as the source allows. Upstream from the actual loudspeaker itself, the world of music has gone digital. The tech that makes our music so easily available to us may be complicated but getting at least a passing knowledge of it all isn’t. With that in mind, here is our Digital Music Primer:

The human voices and natural instruments like pianos, guitars, drums and the like all reside in the analog domain. From the 1880s on, we recorded and stored music through the use of devices that would transfer the vibrations of the musical energy onto a medium that was easily manipulated by these vibrations – wax cylinders, acetate record albums, magnetic recording tape.

In today’s world these vibrations are captured digitally, allowing us to take whatever music we love, in whatever quantities we choose anywhere we go. Musical performances are now converted to a series of digital bits. From there it will remain a giant mass of organized 1's and 0's until you convert it back to analog to listen to it.

After we record our analog performance we send our recording through a circuit called an Analog-to-Digital Converter (ADC). Once we've digitized the music via the ADC, we the 1's and 0's into a digital file. When we get ready to listen back, we un-digitize by reversing the process through a Digital-to-Analog Converter (DAC). That analog signal is then sent through our amp to our speakers.

The ADC samples the frequency (and amplitude) of the signal at a set rate and then converts that sample to digital information (binary 1s and 0s) and it is then stored as a digital file.

Take whatever song you’re thinking of right now and freeze a single slice of it in time – that’s what an ADC does. The resolution of the sampled music comes from what we do with this singular slice of time.

The number of samples we take of this singular second of music is called the sampling rate. With Red Book CD (the standard for CDs) we take 44,100 samples of this singular slice of music per second equating to a sampling rate of 44.1kHz. Obviously, the more frequently you sample the more information you retain, so it stands to reason that a sample rate of 96kHz (considered the lower limit of high-resolution) will sound better that 44.1kHz, but not as good as 192kHz.

If we look at the sine wave below, which represents an audio signal, the y-axis (top to bottom) is amplitude, or volume, and the x-axis (left to right) is frequency, or time.

To convert the signal to digital, we assign a digital number to pre-determined sections on the y-axis, this is the word size. Common word sizes in audio are 16- and 24--bit. Then we take samples of the signal along the x-axis. The amount of times we sample is called the sample rate, (the more we sample the better the sound).

In the digital domain we can store the information on a CD, hard-drive or the Cloud (which is really just a hard-drive someone else owns). Magnetic tape and vinyl records are simply analog storage devices.

The illustration below simplifies the conversion process by using relative points of reference to make the point. It is not meant to be an accurate, mathematical depiction of analog-to-digital conversion. 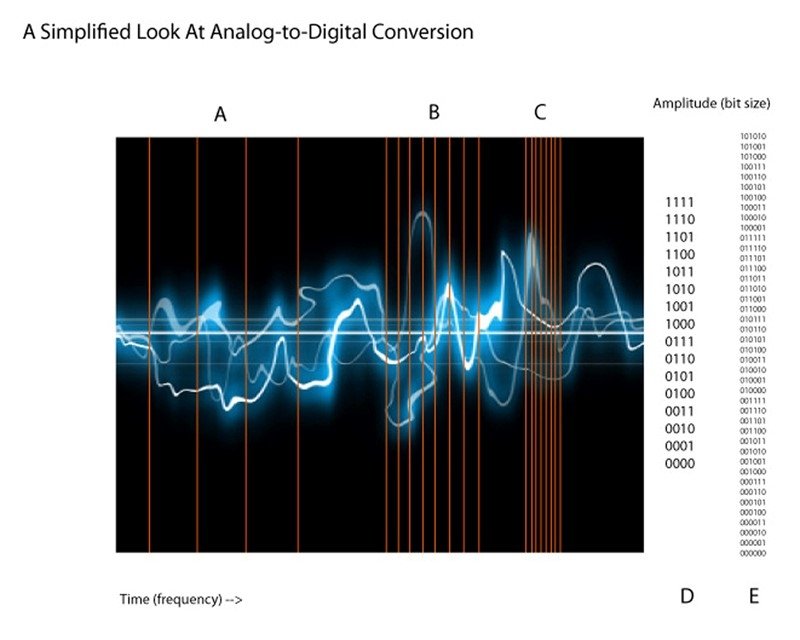 The lines at A show a very slow sample rate, which leaves out a lot of the audio signal. For example, lower sample rates are used with telephones and hand-held radios where a very limited frequency range (the human voice) is sampled.

B represents a medium-sample rate. For this demonstration we could say this is a sample rate of 44.1kHz, and C would represent a very high sample rate used for professional applications. The sampling standard for CDs and commercial audio started at 44.1kHz, but 48kHz is now considered the standard minimum sample rate.

But sample rate isn't the only thing we should be concerned about. Word length is actually more important. Basically, we're converting all of our wonderful analog music to 1's and 0's, so it stands to reason that the more 1's and 0's we have, the more detail we capture and therefore the higher the sound quality when we listen back. It’s not just the number of samples we take but the amount of that information we store that determines the sound quality of a digitized song. That’s where bit depth comes in – the deeper the bit depth (the larger the data word), the higher the resolution.

Red Book CD uses a bit depth of 16-bits. The broadcast video standard for audio, as well as files considered high resolution is 24-bits. Dynamics are particularly affected by bit depth, and by adding those extra 8-bits of data our ability to maintain the dynamics of a musical passage is greatly enhanced. If you listen to music that is not very dynamic you’ll have a hard time hearing the difference between 16- and 24-bit.

The 1's and 0's at the right of the illustration represent the digital record of the sampled amplitude. The sample is taken at a specific time, and the amplitude of the signal at that time is stored in the data word. D represents a small word of four bits in length. You can see that with only four bits of data we are not able to capture a lot of amplitude data, irrespective of the amount of times we take a sample. With four bits we are only able to capture 16 different data points.

The trade-off is file size. When we increase the resolution of the file 16- to 24-bits,  we also increase the size of the file by a factor of thirty-two! When storage was expensive and limited, lower resolution was necessary in order to store any usable amount of music. But with the exception of your phone, storage has gotten inexpensive and quite expansive which allows us to store more decent sounding music than ever before. As the technology improves the days are numbered for 16-bit audio.

That’s where digital compression comes into play. To fit as much music in as small a space as possible we learned how to compress the digital file – basically by removing data that is not absolutely necessary to the coherence of the song. The basic notes and sounds will still be there, but the life and dynamics are removed. Through ear buds or cheap computer speakers you’ll probably not notice the missing stuff, but when you listen on a better quality system you will definitely notice the missing bits.

For example, Spotify bitrates for Android, iOS, desktop devices and the webpage app or listed at 320kbps for Premium users. For Chromecast users the bitrate dips to 256kbps. Is there a difference in quality? Yes. Is that difference (~70kbps) noticeable? Maybe.

Bluetooth APTx has a potential bitrate of 325kbps (depending on source). Apple Airplay bitrates under the AAC format they use are capped at 250kbps. On a high-quality system the difference will be noticeable and quite annoying to listen to, but as you approach mid-level systems and lower, that difference becomes harder to discern. But there are still several other factors to consider when we talk about digital music quality.

To sum all of this up, let’s look at it this way: The higher the number the better the listening experience. A 96kHz sample rate is better than a 48.1kHz sample rate but not as good as 192kHz. A word-length of 24-bits is far superior to a word length of 16-bits, (it’s an exponential increase in quality – literally). A bit-rate of 250kbps is generally not as good as a bit-rate of 320kbps.

This all boils down to one thing – it if sounds good to you then great, but never limit yourself to what you’re used to or comfortable with. Science has given us the incredible gift of amazing sounding music at quite literally the click of a mouse button – it’s all there for the taking, whether you get the science behind the science or not!